The house that Rice built. The house that logorrhea won. Despite her penchant for henpeckery, one has to wonder, was “Mr. Beat” Larry Lipton driven mad by the structure of her incessant motormouthing, as it spewed from her in a surreal and inordinately complex form? This is Craig Rice, after all. Her next husband she met while in the looney bin, so we figure he could take it.

Rice, who outsold Christie and the noir boys (and made the cover of Time in ’46) is largely forgotten today. Like so many words into the ether, the house has since disappeared, replaced by this piece of 1970s architectural fancy. 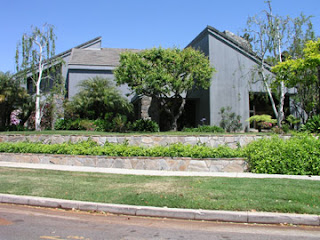