Los Angeles, in the months after Pearl Harbor, had a serious case of the Jap-jitters. Anti-aircraft batteries up and down the coast were put on Green Alert (ready to fire) every time a whale surfaced. True, the Japanese sub I-17 did shell a petroleum refinery, but that was only to destroy a set of slippery stairs Commander Nishino had slipped on in the 30s, and only in destroying them did he regain face.

In any event, during the morning hours of 25 February, 1942, Angelenos finally went batshit and blew the hell out of the night sky, which may or may not have had some nefarious meteorological balloons floating around in it. Of course, we now know, with sober retrospect, it was just a UFO: http://www.rense.com/ufo/battleofla.htm

Imagine, here on Avenue 42, peering into the sky and wondering, what would come over the horizon? The Nipponese? Bug-eyed saucer men? 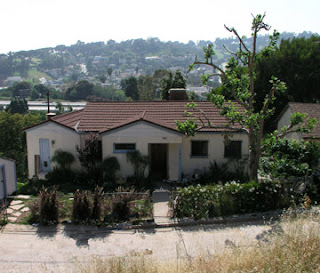 Times were similarly uneasy five years later. Sure, the Axis was vanquished, but now, on top of little green men, we had big Red governments. Worse yet was daddy, who’s been acting all funny. Sometimes the war comes back to him. Then, all of a sudden, boom!

Best to just leave him be and go play in the basement with those funny Howitzer-whoozits. Then, all of a sudden--
Posted by Nathan at 3:51 PM