Cruise down Echo Park Ave. Descend along with the numbers and shine your tear-drop spot at addresses painted on the curb until you hit the 500 block… oh. Who put that there? 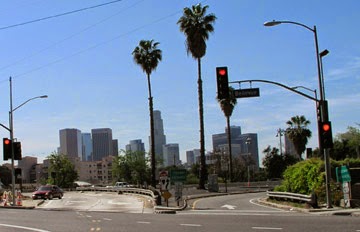 When our unknown driver swallowed his last, perhaps the final image burned on his retina was of spires atop once-stately Victorian homes, pointing heavenward from the unmovable earth of Bunker Hill.

Skyscrapers mark those mansion’s end; Mr. Anonymous' end on Echo Park is paved and rushed over by endless commuters. Freeways divide and destroy neighborhoods: adjacent streets like Lucita and London were wiped away by the 101. A few blocks east were streets like Centennial and Custer, also obliterated, there by the 110.

A police pursuit with a violent end? Would have made for fine live news coverage. Oh, that KTLA had seen fit to purchase Sikorskys.
Posted by Nathan at 10:25 PM