After the war the homeowner was free to indulge that American mix of fantasy and modernity. For those unable or unwilling to relocate to new tracts out in the Valley, it was of course possible to remake your stodgy bungalow a la what you saw overseas – a Mansard roof is always nice, or perhaps something Japanesque. And then there was always stucco. Oh, how you could get stucco.

But for the folks along Harold Way, where stood sturdy structures of lathe and plaster, there would be few remaining Sundays replete with well-intentioned if ill-informed home repair. Rather, some suit at the County Regional Planning Commission drew a line across a map. That suit had a brother in the demo business and a cousin who rolled in connivance with the rights-of-way agents. From hell’s heart, the dagger of Imminent Domain stabbed at Harold. 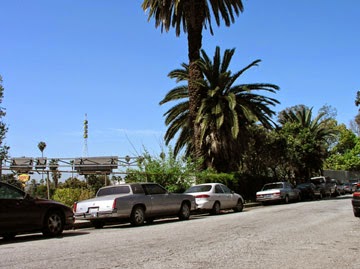 Today, those old palms stand as a faint reminder of the homes that once stood behind them. Of course, the shadow of taking still falls over Los Angeles. Caltrans remains a higher-up in LA’s pantheon; someday they’ll take South Pasadena. LAUSD is the drunken Zeus of them all, conspiring in a shadowy cabal with developers and their minions to take your home or business next. You know, for kids. Just like freeways. 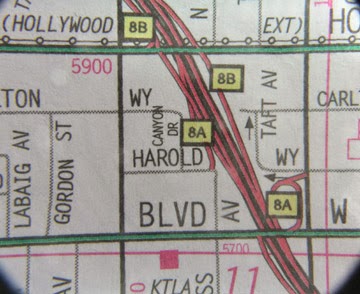 The Hier’s tale should serve to remind one and all that we are merely tenants here in Los Angeles; the Powers That Be our overbearing, morally suspect, property-destroying landlords.
Posted by Nathan at 12:26 AM