Bunker Hill, Down a Manhole

The manhole in question:
What else do you see? Nothing. Except Geoff Palmer's Orsini Apartments in the distance. Between that infant-concealing manhole cover and the Orsini, here at the northern end of Bunker Hill, just east of its Fort Moore area, once stood the 1887 Geise Residence. Couple of years ago, a man named Geoff Palmer applied for a demo permit to raze the LAST remaining Victorian structure on Bunker Hill. He didn't get it. Nevertheless, the City had decided to relocate the house. Palmer told his foreman to knock it down anyway. Palmer got a slap on the wrist. The house is still gone, though.
Palmer also knocked down these adjacent structures a few weeks ago: 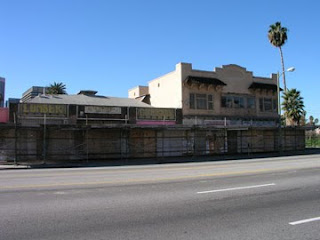 --which is too bad, as they were a pair of fine early commercial structures, one a Mission style with nice tile work, the other having cool ghost signs that read "Lumber" and "Mouldings" and, in the middle, likely indicating its original purpose, "Auto Repairing." These, and the Geise Residence, were flattened for the forthcoming Orsini Two. And the site for Orsini Three? Across the street to the north:
And thus will serve to fuel the total obliteration of Bunker Hill from our collective memory, in conjunction with the loftifization of the Giant Penny, the Pan-American, Victor Clothing... some will profit, but will it be us? Or our Palmers?

No wonder Angel's Flight lashes out at man -- as does any animal who can no longer recognize its habitat. 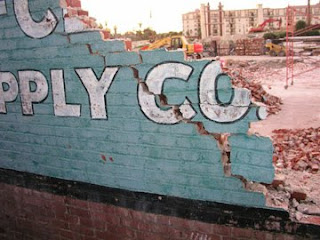 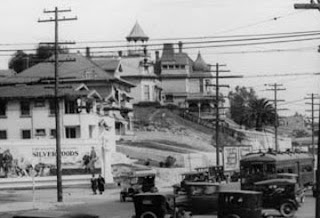