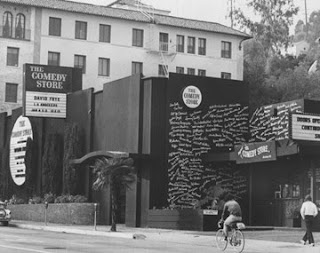 But the Sunset Strip couldn't compete with the Vegas Strip by the late 50s, and Ciro's -- along with the Trocadero, the Mocambo, et al -- disappeared, leaving the horror that is today's Strip in its wake.

The Modern facade has been destroyed by the Comedy Store. I suppose they think that's funny.