Library Park and the Roughly Analogous 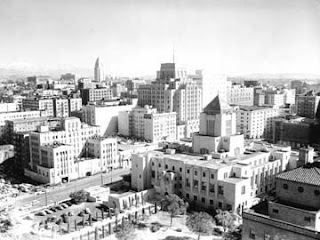 Mr. Ahlberg dragged our vic into the park on the lower left of this image. Middle-aged women of 1947 were, then as now, ripe for sacking and rape and other unglorious ends. Once and a while, angry mobs say enough is enough and no means no, usw. So was screamed for this park and its library.

The Edison Building (there, over the shoulder of the Library, Allison & Allison) has withstood its attackers since 1931 (she maintains the finest lobby murals in town). The Fruit Exchange seen across from Library Park (Walker & Eisen, 1935) wasn’t hardy enough to prevent calamity. (And is, at present, site of the Tallest Building West of the Mississippi.)

Library Park fell to the pavers: 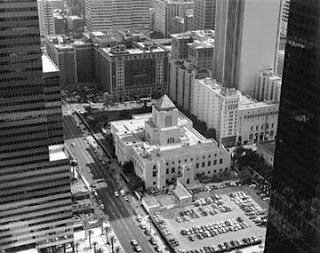 and then, that Grande Dame, the Library herself, was set for sacking and rape and, worse yet, outright murder. The developers and city colluded to whack her big-time. They’d sold her air rights for some late-80s AC Martin/SOM knock-offs when they set fire to her. Twice.

But the onlookers screamed and yelled and nearly took apart the evil-doers: so was borne the Los Angeles Conservancy. The Library thus stands as a potent metaphor--yes, They might have a gun. Whether or not it's too late, whether you have the guts to yell "Let us have 'em!" during or after an attack, for God's sake, yell, yell, and don't fucking stop.
Posted by Nathan at 8:18 AM