The boys at Lockheed and Vega Aircraft didn’t worry too much about the noise associated with assembling P-38s, or the probability of accidents when testing the Constellation. It was a sparsely populated part of the world out there in the No-Man’s Land between Burbank and North Hollywood.

But by the end of the war houses had sprouted up everywhere. They’re all still there. 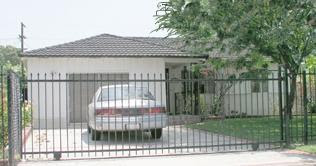 Some things are eternal—like a son changing the locks on his mother on Mother’s Day. Other things change—a street’s worth of garages become extra rooms (above). Ailing jetliners start falling on you instead of test planes. Right nearby the Valhalla Cemetery’ll haul off and expand (giving pilots of ailing jetliners more room to ditch). But the houses remain relatively intact, and every one, every single one, is there because of Lockheed. After all, during the war Lockheed had more employees than there were residents of Burbank and North Hollywood combined.

What’s most shocking about the area is that there’s no physical remnant of the mighty city that was the Lockheed facility. The unbelievable loss of the Earhart/Hughes hangar in 1998 was right in line with the mindset that Lockheed, the Airport Authority, and the City of Burbank maintain: to hell with our aviation history. The most super-secret of super-secret development buildings, the “Skunk Works,” whence came our first fighter jet (the P-80), the U2 spy plane, the Polaris and the Stealth, unceremoniously demolished. And that Building 85 was demolished by the city when it entered into the business of funding, of all people, the Hilton family? Let’s not even talk about that.

Thankfully, around the corner from the Bryans, a ’50 Roadmaster keeps a bit of the bygone spirit of the area alive. 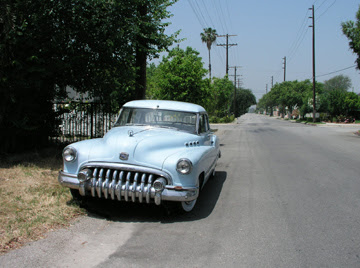