10 May was a slow news day for crime. But as I put my feet up and vainly perused the paper for evidence of murder and mayhem, an item about a new house caught my eye. Here in 1947, where building costs are high and the housing shortage acute, veteran Clement Cointe has decided to build a miniature dream house, to live in until such time as he can enlarge.

Enlisting architects Harold Bissner and Harold Zook, they’ve come up with a 700sf one-room house with a magnificently modern wall of glass (please note how unobtrusively it fits into the landscape): 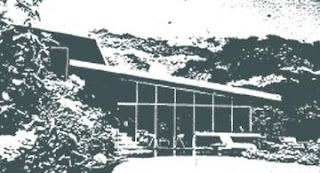 Their one room is all-purpose, with closets that open to reveal built in linen and dish storage, card table, bar, coat closet and radio-phonograph. The Harolds included built in bookshelves and desk. The bedroom area—couches of grey upholstery with Mexican cow pony pillows—can be partitioned off with an accordion wall. The whitewashed fireplace in the wall of rough-sawed redwood stakes is a nice touch. 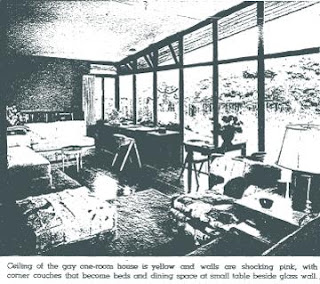 Oh, hell. Since I’ve brought up the housing shortage, I might as well touch on one of LA’s juicier housing stories: in the late 40s the City Housing Authority, its coffers full of federal lucre, pulls an eminent domain on the people of Chavez Ravine. Out come the bulldozers, which level the barrio community. Don’t worry, says the Authority, we’re building you a 3,300 unit high-rise housing project, and you’ll all get first pick of the brand new units! (And it’s designed by Richard-Freakin’-Neutra no less!)

But uh-oh, here comes the Committee Against Socialist Housing. And here comes HUAC hot on their heels. In 1953 new mayor Poulson kills the whole deal, including the resident’s Right of Return. ‘Round about that time O’Malley couldn’t connive an Ebbets Field replacement out of the borough of Brooklyn, so he went fishing in LA, and found a sweetheart deal if ever there was one. You know the rest. Go Dodger Blue.

Not that I don’t love Captain Emil Praeger’s park—the early 60s stadium is replete with atom-age flourishes—but I hope no-one goes there without recalling this image: 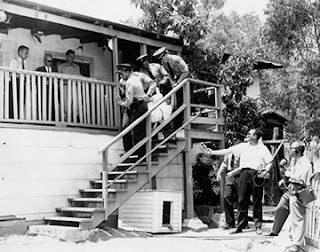 Sheriff’s deputies forcibly evicting Aurora “They’ll Have to Carry Me” Vargas from the Arechiga home; bulldozers razed the structure moments later.
Posted by Nathan at 4:49 PM

Oona and I own this house and have since the early eighties, although we rented it for ten years before that. The people we bought it from were briefly partners in a florist business with Mickey Cohen.