Well, not really. This wasn’t a rigid-framed dirigible airship like Count Ferdinand’s England-bombing namesakes, this was just a gasbag on a journey of freedom, terrible freedom, seeking to join its brethren at Mines Field. Perhaps LA's curious onlooker recalled the 9,000 incendiary balloons sent to America by the Japanese—though those only managed to kill six picnickers in Oregon, proving again that picnicking is a dangerous activity. 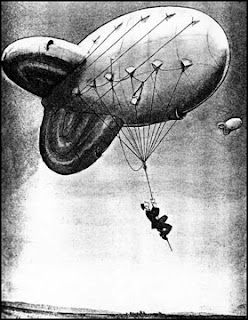 Barrage balloons were part of our air defense system, designed to thwart bombings and low-level air attacks. This one was probably Air Corps surplus, discard of a War Won, finding new use in peacetime America (like the friendly antiaircraft shell, plaything of children; see entry of April 26).
Posted by Nathan at 7:55 PM