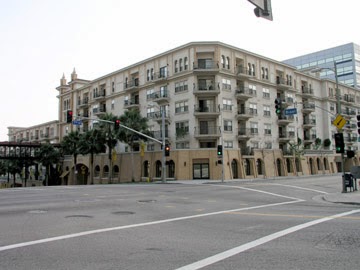 Look familiar? Bears some similitude to that building we blogged on April 12? Palmer apparently elected to hire not an architect but a designer, and hire said designer only once. What other rationale explains the eerie similarity—that whisper of "Tuscan Fortress"—shared by the Visconti, Piero, Orsini, and Medici? This one, for those who can't tell them apart, is the Medici: famous for its thin walls, dismissive management, drunken students and absence of guest parking. (While Palmer didn’t include any low-income units, to his credit, he also didn’t take a nickel in public money.) But enough of the Palmerwatch. There are still some tiny pockets of old LA in the area around 7th & Bix; good times to be had by the urban archaeologist.
Posted by Nathan at 6:42 PM