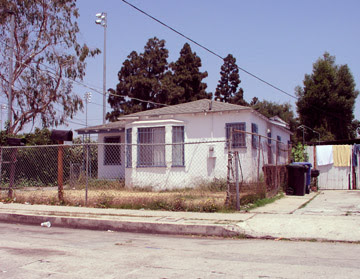 Three shots to the head. Grasses hopefully tended with more care than these, fertilized by blood. A living room with some spattered brain, but non-fatal. Broken marriages and bloodshed are as commonplace as security bars and klieg lights. And rightfully so.
Posted by Nathan at 5:05 AM

Architecture, murder and hardboiled writing. Do you suppose McCoy had the 1947 Project in mind when he knocked off this forgotten little tale? (Note the first-person narration, genre-lovers). He's got a nice little formula: A good hook, the story and a stinger at the end.

Destiny
and
the
Lieutenant

Life kept playing weird
tricks on the detective.
But this was surely the
strangest prank of all

I was standing by the bar when the lieutenant came over.

“Sure,” he said. “I’m turning down nothing today.” He ordered a beer. “This is the last day I’ll be drinking on salary. From now on any drinking I do will be on my own time.” He lifted his beer and toasted: “To guys who get pushed around by destiny—“

I drank with him, but I didn’t understand what he meant. “What does that mean?” I asked.

“They busted you?” I asked, surprised.

He nodded gravely. “At least a captaincy. If I’d shot and killed the guy I’d’ve got a captaincy, too. He was a bad guy, a really bad guy.”

“He sure was,” I said. “With him out of your hair you’d think everybody’d be very happy.”

“Not the Commissioner,” he said.

“I still can’t figure out how that guy got in the bathtub,” I said.

“Neither can I. I searched the house three times. Under the house, inside the house, on top of the house. How he got into the bathtub I’ll never know.”

“It sure takes the cake,” I said. “I been a house mover for twenty years and I never heard of anything like this before.”

You can’t stay in any business for twenty years and not see some strange things happen, but I’d never heard of anything like this happening before. It started out to be a routine job, a push; a little four-room cottage that was a combination real estate office and home had to be moved off one of the main streets to a lot in the suburbs.

The fellow got all the furniture out and the day crew took off all the doors and nailed all the windows to minimize the risk of glass breakage, jacked it up, put it on rollers and slid it onto the big truck that afternoon, waiting for the night crew to haul it away at midnight. (We did most of our house-moving between midnight and seven in the morning so as to be as clear of traffic as possible). When we started for the truck about eleven-thirty we ran into the cops. They had the neighborhood surrounded for three square blocks; somewhere in there they had a killer trapped.

An old man and his wife who ran a liquor store around the corner had been murdered, evidently in an attempted holdup, and a prowl car had been practically on top of the killer when he ducked out of the front door.

This had been about ten o’clock, just as the old man and his wife were in the habit of closing up—and when we got there the cops had the area covered like a blanket. Very few people were getting inside the cordon and nobody was getting out. But we explained to the lieutenant that we had to move the house and he looked it over very carefully and told us to go ahead.

We hung the big red lights all over the back of the house and went ahead, and as far as we were concerned that was that. It was a routine job, a push. All Joe and Eddie had to do was sit in the cab, with Joe driving and Eddie combing the all-night radio stations for jive records; and all Boggess and I had to do was ride our bicycles ahead of the truck, pointing out the predetermined route and keeping drunk drivers away from the sides of the house that stuck out a few feet on both sides of the truck.

Then at Magnolia and 16th Streets it happened. I didn’t notice the wires, I was just following the route (when a house is to be moved from here to there one of the foremen inspects the streets and the power lines and trolley wires, picking the route that avoids the hazards most); it just never occurred to us that anything like this could possibly happen. But all of a sudden there was a flash of fire and a loud whish! So close together they almost overlapped, and I knew that this meant trouble. I yelled at Boggess and we wheeled and went back to the truck. It had stopped in the middle of the intersection and a few feet away on Joe’s side, the broken trolley wire was writhing like a living thing and exploding with a sputter every time it touched the steel track, ground its fifteen hundred volts.

“Are you all right?” I hollered at Joe.

But getting to a phone wasn’t necessary. A police cruiser rolled up and two cops reported it by radio, and got out and took charge, keeping the few stragglers from moving too close to the trolley wire.

“Someone’s gonna catch it for this,” Eddie said.

“Don’t look at me,” I said. “I’m just following the chart.” I took it out of my pocked and showed it to him. “Look. You can see what it says. Up 16th Street across Magnolia to Carlisle—Don’t blame me. Blame Menefee. He made it out.”

One of the cops came up. He was a little sore.

“Seems to me like you birds’re pretty careless,” he said. “Look at that. You expect that to clear?” he was pointing to the vent pipe that stuck up from the roof of the house on the truck.

“What about that pipe?” Joe said to me. “Wasn’t it measured?”

The cop took our names and the name of our company and we went back to transporting the house.

That was all I had to do with the job. We all made written reports and got bawled out and then forgot it—for a few hours. The day crew went to the new location that morning and unloaded the house and that same afternoon a couple of kids were wandering through it and found the guy dead in the bathtub. He had been electrocuted but good. He had in his pocket a pistol with some cartridges missing but with the shells that remained in the chamber ballistics was able to confirm that this was the gun that had killed the old man and his wife in the liquor store.

It was a good story, all right, and the papers played it up and because we at the warehouse had a personal interest in the case we read it all. But then one of the newspapers started asking a question: What kind of police department was it that could let a vicious criminal slip through its fingers by using an empty house? It seemed silly to worry about this now, but the paper did.

It kept hammering away.

“Sure, sure” he said and ordered another beer. “I dunno—” he said. “You remember Fred Slater?”

“That’s right. Everybody in the country was looking for him. I caught him. Up at the lake. Up there you can’t use live bait, only plugs and spinners. I saw this joker sitting in his boat across the lake and I thought he was up to something. I went over and sure enough he was using mudsuckers. I was only going to tell him off and let it go at that, but he got tough and the game warden and I ran him in. He turned out to be Fred Slater and I got promoted to lieutenant.

“Now I’ll give you the real topper. That will be exactly 15 years ago, come tomorrow. Right on the nose at eight o’clock on the morning of Aug. 5.” He lifted his beer. “To guys who get pushed around by destiny—“