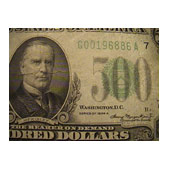 Nightclub owner Paul Rubin is a cautious fellow... at least he likes to think he is. So when he stopped at the bank near his club at 1571 W. Washington Blvd. to withdraw two $500 bills, he put his antennae up. While shopping in the drugstore around the corner at Washington and Vermont Ave., those antennae detected a strange man who seemed inordinantly interested in his activities.

Rubin darted off to his club, highly conscious of the grand in his pocket. The stranger followed close. As Rubin slipped in the front door, he pushed a buzzer that told employees to call the cops. The stranger stepped inside as the buzzing died in the air, two green portraits of William McKinley in his hand. "Say Mister, you dropped these in the drugstore!"
Posted by Kim at 5:50 PM


CHICAGO, Feb. 23.—(INS) A dental expert warned today that crooked front teeth may be a cause of juvenile delinquency.

Dr. Roy G. Ellis, director of the dental clinic at the University of Toronto, told the Chicago Dental Society irregular teeth are responsible for the “development of complexes of the mind.”

Dr. E Bruce Clark of Pittsburgh, Pa., said that age, skin color, cosmetics and even the time of day and weather play a part in selecting false teeth for patients.

Dr. Clark said that younger patients usually have the brightest teeth and shades should be simulated in accordance with the patients’ age.

He advised dentists to make their tests for women’s dentures between 10 a.m. and 2 p.m. and preferably during weather conditions when white clouds are present or the sky is overcast. He said:

“Women at such a time will be using the proper daytime cosmetics. If the teeth are in harmony with the skin in daylight they also will appear in harmony under artificial light at night.”

Front page news at the Examiner. The Times, meanwhile, notes the large number of paddleboard enthusiasts taking advantage of the high surf between Redondo Beach and Hermosa Beach.

Quote of the day: “It seems strange to us who have been in Russia that many American intellectuals and writers have fallen for the Soviet line. No group has been so consistently pushed around and terrorized in Russia as writers and intellectuals. Dictators fear ideas more than bombs and bullets.”
Eugene Lyons, former editor of the American Mercury, speaking at the Wilshire Ebell theater.