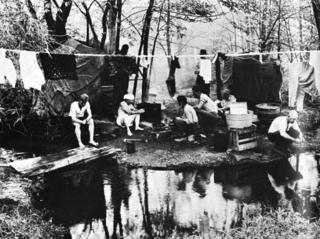 The hobos of Santa Barbara's Jungleville gave a rousing cheer tonight as news filtered through their encampment that their great, but aging, benefactress Mrs. John Howard Child had ensured their protection for the foreseeable future by deeding her estate Vega Mar—17 acres on East Cabrillo Boulevard between the Mar Monte Hotel and the Mrs. William A. Clark Estate, currently valued at more than $100,000—to the city.

A previous attempt to give the property to the University of California foundered when the school was unwilling to allow Mrs. Child to remain in her home. Some years ago, she sold the section of property where the hobos camped to the Mar Monte Hotel people, and personally supervised the moving of their ragged dwellings to the new location.

Mrs. Child retains a life interest in the property, and has declared that the hobos shall not be moved so long as she survives. 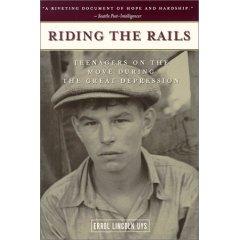 Lillian Child died in 1951 at the age of 75, four years after setting up provisions for a hobo jungle nicknamed Childville at her 17-acre estate on East Cabrillo Boulevard. Two years later, the property was deeded to the city of Santa Barbara by the Santa Barbara Foundation, the original recipient.

In 1958, city officials polled the 22 residents of Childville to see which ones had lived there during Child’s lifetime. While those three men were allowed to remain indefinitely, the rest were given two years’ notice.

Her mansion, Vegamar, built in 1896 by John Beale of Pasadena, was burned to the ground in 1959 by the Santa Barbara Fire Department because it was cheaper than tearing down the old, vandalized structure, officials said. It was gone in an hour. (Lillian Child had originally married Beale, then married John Howard Child upon Beale’s death).

Times reporter Dick Praul found a genial collection of a dozen elderly hobos living in Childville when he visited in October 1959. They paid no rent, received city utilities for free and had a community house with showers, a recreation room and laundry facilities.

John Craver, Childville’s “mayor,” said: “Needy, worthwhile persons who can work and have some money coming in are allowed from time to time. But we strictly keep winos and other floaters out.” In fact, Park Supt. Finlay MacKenzie said, no newcomers were allowed because the city planned to build a zoo on the premises.

Craver apparently went into a rest home soon after his interview and another man, probably Jacob Kester, 78, died. The only remaining hobo was an unidentified 47-year-old man who was put on the road because he followed the harvests and lived at Childville intermittently. The small beach cottages where they lived, leftovers donated by a motel undergoing renovations, were burned down.

In place of Childville, the city built a zoo, using the hobos’ former community room as an animal infirmary and kitchen. The Times noted that peacocks strutted in what was once a hobo sanctuary.