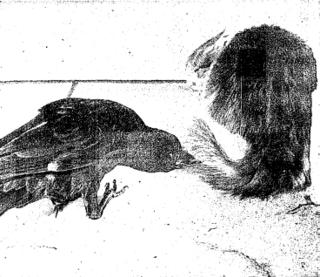 It was a black day for Dingbat, long-haired tabby cat companion of Mr. and Mrs. Richard Patton of 571 S. Coronado Street. The Pattons found a weird black bird out on the lawn, its feet tied with a leather thong, and, with typical human foolishness, thought it would be a good idea to bring the hellish creature into the apartment.

The raven (or mynah, reports differ) promptly chased Dingbat out the door, and if it weren't bad enough that every kid and cat and bird in the neighborhood knew of Dingbat's shame, the man from the newspaper came and made kitty pose with the fowl interloper.

Dingbat won't be letting his owners out again for a long time. 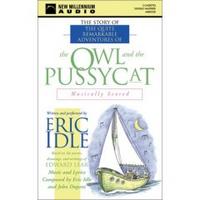 suggested listening: The Story of the Quite Remarkable Adventures of the Owl and Pussycat [ABRIDGED] (Audio Cassette) by Eric Idle
Posted by Kim at 5:35 PM

Hard at work as a mechanical engineer during the day, the former naval aviation researcher still finds time to do a little writing. At the moment he’s on his first novel, which is a book for children. It’s an amazing story about three young friends who have a rocket-building club.

Invited to address local librarians at a 1948 luncheon, the author says: “If we have a military base on the moon there will be no war. This would change the strategic situation so completely as to immediately postpone the cause of war.”

His first novel is published by Scribner's under the name “Rocket Ship Galileo.” The author lives at 333 S. Clark Drive, Los Angeles, Calif.

His name is Robert A. Heinlein.