Woman Shot as She Sits on Bus-Stop Bench 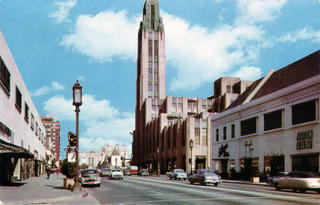 Was it shame, pride or loss of blood that made Dorothy Hawkins, 24-year-old waitress, half-rise from her General Hospital bed to grit her teeth and insist the man (tall, slim, 20s, brown suit) who shot her as she sat on a bus bench at Wilshire and Vermont was a stranger? And the stranger was polite. After shooting her, he said “I am sorry that happened. I’ll go and call and ambulance.”

But when police visited Miss Hawkins’ apartment at 1214 W. 8th Street, they found the door smashed in. Neighbor Frances Darby described a man busting it down, arguing with Hawkins, and leaving with some boxes not long before the 2:30am shooting.

Former Folsom prisoner Aubrey Jones, 26, was raised on the horn and asked to come down to the station. He admitted he’d spent some time with Miss Hawkins, but declined to meet officers as requested. A bulletin was issued for his arrest.

Meanwhile, the lady has less than a 50% chance of surviving. Gut shots are tricky that way.

I think "Gut Shot At The Bus Stop" is a catchy title for today's post.

Joking aside, Joe Wambaugh wrote in horrifying detail in his debut novel "The New Centurions" about the perils and agonizing pain of gunshot wounds to the abdomen. Supposedly, there is no pain to equal it.