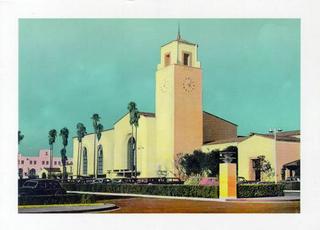 The train engineers are on strike, and Union Station is beginning to look like a flophouse. Guitar-strumming Mexican actor Jose Y. Torvay made the mistake of cashing in the bus ticket he’d bought in Mexico City after the Warner Brothers gave him train ticket as an après-shooting gift. There’s now a two-week waiting list for southbound bus seats, and no hint of when the engineers will return to work. Fifty manual laborers bound for Portland kibitz in the patio, and a big brown Boxer dog named Duchess swelters in her crate, while a dame in El Paso waits for the living symbol of puppy love she’d been promised from a West Coast Romeo (that’s Albert J. Kallis of 1300 S. Mansfield Ave.—sorry, gals--and sci fi poster geeks--he’s taken!).

In the courthouse corridor, just after she received one of the biggest divorce settlements in Los Angeles history, someone asked her: “If you had your choice between half a million dollars and a happy home, which would you take?”

She walked to the elevator, looking unhappy.

It didn’t start that way, with him going off to work one morning and disappearing for six weeks. “He was arrogant,” she said. “Sometimes he’d talk to me like I was 3 years old.”

They met in a bar. He was waiting to go into the service and she was underage—just there for the music, he would tell people later. “She was 15 and I was 21 and we shared a lot of the same background, even to both our families being on relief together,” he said.

He never knew his father and was a sickly child, so ill that he sometimes had to be carried up to his mother’s third-floor apartment in a crumbling building at 3rd Street and Flower. A man downstairs once played cornet with several bands of an earlier era and when he was evicted he gave the boy a Bix Beiderbecke record, “At the Jazz Band Ball.”

One morning when he was 7, some big kids roughed him up, tore his shirt and scattered school pencils all over the street until a beat cop stopped them. He spent hours at the L.A. Public Library down the hill. When he found some crayons in the trash, he started drawing and became a fair artist, with a portfolio of watercolors good enough to get him an art scholarship to USC and the Chouinard Institute. But instead of continuing his education, he took a job at Silverwoods, the men’s clothing store, to help support his mother.

They met at a jam session in a place on La Cienega near Pico. He knocked over her drink. She was in her teens, so he always said later that it was soda. Before much could happen between them, he was drafted.

While he was in the service, she was discovered by a talent scout, working as an elevator operator at Roos Bros., 6320 Hollywood Blvd., just west of Vine. The same elevator Susan Peters and Jane Russell used to operate. The newspapers described it as the luckiest elevator in the world for aspiring starlets.

When he got out of the service, he headed up to San Francisco to see if he could get involved in radio coverage of the formation of the United Nations. He used to hang out at the radio studios in Hollywood as a kid, so he had some background in broadcasting. Then he came back to Los Angeles.

Seven years later, she said: “He’d come home at night and turn on the television set. He wouldn’t talk. Just sit and look at it. It made me nervous all this. Lost 15 pounds.”

A month later, asked if he was getting remarried, he said: “I’m not marrying anybody. I’m married to my work. I work 14 hours a day and would sleep on the set if I could.”