What was 25-year-old model and movie bit-player Marjorie Jane White doing standing on the Ocean Avenue bridge overlooking Colorado Avenue at 3:30 in the morning? Thinking about money troubles and how nobody liked her, poor dear.

When Sgt. James Vitale saw her gazing down at the traffic, he knew he might have a jumper on his hands... so he crept up and grabbed the lass, and pulled her away from the brink.

"I don't think I would have had the nerve to jump," she sobbed, "But I'm glad you stopped me!" Marjorie's dad Paul Parr Smith picked her up and drove her home to Inglewood. She's a contestant in the July 17 Miss Hollywood contest, so judges: give the girl a break!

P.S. Change the name, kiddo. Hollywood memory is short, but not that short. 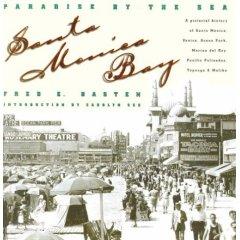 Those mysterious flying
gizmos, that is.

Three of the metallic,
gleaming discs were seen
circling in the moonlit sky
last night by Mrs. Ernest
Michel of 439 S. Hamel
Road, Beverly Hills, and her
daughter Marian

“They were going around
and around in a circle,” Mrs.
Michel reported. “We stood
and watched them for 10
minutes before they disap-
peared just as silently as
they appeared.”

The objects seemed to
vibrate as they spun, she
said, and tiny, meteorlike
tails were “clearly discer-
nible.”

This is where the 1947 Project intersects with other 1947 Project. Mysterious flying discs were reported June 28 over New Mexico, prompting sarcastic letters to The Times: (“They went by a cow out in the field right behind our house and the suction sucked the cow inside out so now all we have to do to milk bossy is lean her over sidewise and let the milk run out.”)

The next day, other observers reported that the saucers over Beverly Hills were searchlights reflected off clouds (presumably from another movie premiere or the opening of coin laundry).

Soon Disney artists were offering their conceptions of “jet-gyro pursuit planes” flying in formation over a harbor. Airline crews described encounters with the discs, the Army had a P-80 on standby at Muroc Air Base in case any threatened California and Caltech denied reports that an unidentified scientist on campus said the saucers were a result of “transmutation of atomic energy.”

Donald Levine, 10, of 5418 Dahlia Drive in Eagle Rock says: “I’m just a young boy and don’t know if anybody will believe me,” but claims he saw two yellow discs “looking like a tire with no hole in the center.” On July 6, a woman reports that eight flying saucers had landed in Idaho and on July 7, a state official says he and his wife saw saucers over Sacramento.

There are more explanations as the sightings continue: light reflected from the metallic bodies of airplanes or red corpuscles of the blood passing in front of the retina. Despite all official denials, sightings quickly spread to 36 states. VFW Commander in Chief Louis E. Starr says: “Too little is being told to the people of this country.”

Cynics in Europe poke fun at jittery Americans and hoaxers join in. More officials deny a military explanation for the saucers: “I know of no secret aviation projects which would have the slightest bearing on these so-called phenomena,” says Hall Hibbard, Lockheed vice president in charge of engineering.

The Times conducts “in the street” interviews to take the pulse of Los Angeles: “I think the disks are all right. Uncle Sam’s secret weapon, maybe,” says Ray Contreras. “The Russians are sending them, if you ask me,” says Lola Baverstock. “I’m not going to change my plans about going to the beach because of the disks,” says Helen Bradbury.

“What a farce,” says E.C. Wright. “I was an aviator in World War I. I’ve seen too much unusual atmosphere to be bothered. The disks are the result of some atmospheric condition, that and nothing more. I think people who claim seeing them are sincere. They just haven’t had the flying time.”

The Times editorialized: “Earth may have been passing through a belt of disintegrating meteorites, or it may be a quirk of refracted light, like a desert mirage.”

“Such a phenomenon may have started the whole thing. From then on, autosuggestion is sufficient to carry it, as was the case with the 1942 ‘Battle of Los Angeles,’ when antiaircraft bursts caught in searchlight beams were magnified into 27 twin-engined Japanese bombers, majestically flying in formation.”

On July 9, The Times reports a supposed flying saucer that went down near Roswell, N.M., was nothing but a weather balloon. Accompanying the story is a photograph of Maj. Jesse Marcel of Roswell holding pieces what the paper calls a “weather gadget.” And before you can say “George Adamski” a cottage industry is born.

The big mystery, however, is what became of 439 S. Hamel, where saucers were sighted over Beverly Hills. Maps show that the border runs along the 200 block South Hamel, which becomes Shenandoah when it crosses into Los Angeles. A quick trip to the 1946 phone book shows that Mrs. Michel was Beverly Hills adjacent and living in West L.A. Tsk tsk.