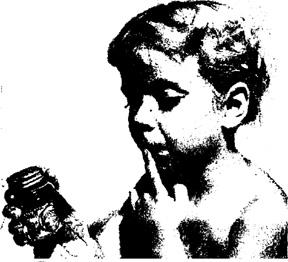 Times have been tough for the Harold Johnson family, but the barely averted poisoning of daughter Janet could be a harbinger of better things.

About a year ago, the Johnsons and their three kids were evicted from their home, and while mom was packing, she contracted polio and was hospitalized for ten months. Church friends found the family a new home at 540 N. Commonwealth Ave. and helped dad look after the little ones. Mom's out of the hospital now and rebuilding her strength. But last week, the family car was totaled, and yesterday, 5-year-old Janet found some poisonous ant paste, determined it looked enough like honey to be tasty, and ate quite a lot of it.

But here’s where the Johnsons ill luck took a possibly happy turn. The ant paste girl was taken to Georgia Street Receiving Hospital, where she made a positive impression on a newsman, who alerted a casting agent to the hard luck cutie. This morning, she was called down to meet Hal Roach Jr. for an informal audition for an unspecified future kid flick. Roach liked the little miss, so peel an eye for her on a silver screen near you.

Suggested reading: A History Of The Hal Roach Studios
Posted by Kim at 10:03 AM

She was born Mildred Strange in Oklahoma in 1910. Raised by her uncle, a Methodist minister, she taught Sunday school in Shawnee, east of Oklahoma City. For a while, she ran a bookstore in a small town.

And then she joined Minsky’s burlesque as Peaches Strange. On her first trip west, she and co-star Myrna Dean broke 20-year box office records at the Follies Burlesque, 337 S. Main St., a theater that is a story in itself.
It’s in the Los Angeles Public Library photo database: http://jpg2.lapl.org/theater2/00015293.jpg

Asked how she behaved offstage by Times writer Jean Bosquet, Strange said: “Just like your sister or your wife, mister. Her act stops on stage.”

“She’s probably even more modest than the average woman, Peaches?”

“Sounds like a paradox, but she sure is. I didn’t say ‘Come in’ right away when you knocked on my dressing room door, did I?”

“Because I didn’t have enough clothes on.”

“What does a stripper think about when she’s doing her act?”

“I don’t think of anything any more. I used to, when I began doing the act five years ago. It’s just a job of work now as far as I’m concerned.”

“You see, some strip acts are ‘grind’ acts, some are ‘bumpers’ and some are artistic. Mine is artistic. I seek only to appeal to an audience’s appreciation of beauty. My thrill comes from knowing that I bring out only the finer reactions of my audience.”

Feeling curious as to whether I possessed such “finer reactions” myself, I went out front to see the young lady’s act. When she had finished shedding garments she was left with a pair of sheer silk stockings, a garter and brassiere adorning her figure.

Hi there,
I believe that Mildred 'Peaches' Strange was my great great great Aunt. I'm wondering if you have any more information on her act, where she worked and even photographs? I really would like to know more about what life was like for her. If I knew more it would really help me to connect the dots.
Thank you!
Lucy

Lucy, I may be able to give you some information about Peaches. Please contact me at reminisceawhileranch@gmail.com