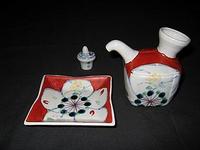 The war is over—so who is trying to poison the Japanese-American citizens of Little Tokyo? Forty people took ill two nights ago, and the cause was quickly found to be near-fatal quantities of arsenic adulterating the strange salty black soya sauce of which that population is so fond. In what seems to be an ingenious targeted attack—which has thus far failed to kill anyone, because the parts per pound were 2.3 grains instead of 2.7—at least one brand of soya sauce proved potentially life-threatening.

Not taking chances, city and state health department workers cooperated with officers of the Pure Food and Drug Bureau of the U.S. Department of Agriculture to seize some 8000 gallons of soya sauce throughout the southland. And while there have been no deaths, Captain Jack Donohoe of the police homicide department is on the case.

All roads lead first to the Staley Manufacturing Company (Decatur, Illinois), which ships soya sauce out to the coast for repackaging by local dealers. Representatives of the firm insist that there’s no way such large quantities of arsenic entered the food chain on their end—so the question becomes, at which local bottler did the deadly powder find its way into the dark and highly-flavored medium?

suggested reading: The Whole Soy Story : The Dark Side of Americas Favorite Health Food
Posted by Kim at 6:06 PM

And on this day the Brooklyn Dodgers -- soon to become the Los Angeles Dodgers -- beat the 1947 Chicago Cubs in a home stand at Wrigley Field.

Damn. I should have taken the opportunity provided by that Dodgers reference to shill for Ry Cooder's brilliant new album "Chavez Ravine".