Mass Vacination Set for All Aboard Train 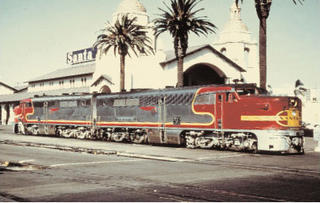 Ray Thompson, 38-year-old waiter on the Santa Fe Grand Canyon Limited, had a rash. It looked a lot like chickenpox, but after doctors offloaded him Wednesday it was determined he was suffering from smallpox.

Health officers now plan to board the train this morning in San Bernardino, and inoculate the 138 persons still on board before its 11am arrival at Union Station. Anyone who refuses the shot will be taken directly from the train to their home and quarantined for two weeks.

Among the passengers are five carloads of delegates en route to the west coast Lions Club International convention. (What’s a little shot between lions?)
Posted by Kim at 8:36 AM

Her name was Vesta Belle and she was 17, an honor student at Jefferson High, a mile and a half from her home at 5320 Holmes Ave. You might think she got her name in the paper for earning a scholarship or receiving an academic award.

Instead, her 14-year-old brother, Carlisle, came home from a playground and found Vesta Belle Sapenter’s body in her bedroom. She was partially undressed and had been strangled with a thin hemp cord. With so many murders of women in Los Angeles, you might expect The Times to give it decent play, but Vesta Belle got two paragraphs on Page 8. Just enough to give a few details and that fact that she was black.

Public records turn up a bit more: She was born in Texas and her mother’s maiden name was Lavollette. Her younger brother Carlisle got a Social Security card in California (556-40-2045 ) and died in Houston in 1983 at the age of 52. But in all, it was not a good day for newspapering in Los Angeles.

Here’s a link to some pictures from Jefferson High’s 1947 yearbook: http://4dw.net/socal/1947jeffwin.html

Right you are... the train and station are just meant to be suggestive of a SoCal Santa Fe stop. More problematic was the Hotel Alex image from yesterday's post. I was looking for Hotel Rosslyn and thinking was "Roslyn," so got frustrated and went for the next big hotel within spitting distance. Mea culpa. It is fixed now.