Visiting the in-laws can be such a drag. But there’s no excuse for behaving like the late Raymond Scott did during his stay with Mrs. Eva Utzinger, 74-year-old mother of Scott’s widow Lucille.

The Scotts were on vacation at the Utzinger home, 368 S. Ave. 21, when Eva turned up with a broken skull at the foot of the outside stairs leading into the cellar. Detectives found a red-stained hatchet in the cellar, and turned it over to the lab to see if the stains were blood.

Also nearby, an unsigned note in Scott’s handwriting. “I must end the source of trouble in this house. You know whom I mean. I find I cannot escape a breakdown. And so, I am jumping from the N. Broadway Bridge. You have been a wonderful family. Here is insurance to get you well.”

Scott, who was 60, and a schoolteacher at Taft, was indeed found gravely injured at the base of the Broadway and Pasadena Avenue bridge. He died at Hollywood Presbyterian. Lucille confirmed that both she and her son had been ill. 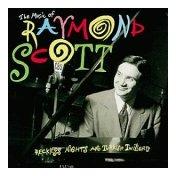 Sojourn Over—James Brink and his wife and their nine children as they prepared to depart yesterday for their Oklahoma ranch after spending two and a half years here on as much as $278-a-month relief ($2,631.04 USD 2005). The county fixed up their car and is paying all expenses back to Oklahoma.

The Brink family, which came to California in 1942 in hopes of finding wartime work, will be familiar if you remember the May 15 entry in the 1947 Project (“Family With 11 Children Loses Battle for Home”). While Los Angeles County would like to be done with the Brinks, they are certainly not done with Los Angeles.

At first it looked like Jessie Brink (who somehow gained another child since May, raising the count to 12) was more than happy to take the county’s offer of transportation back home rather than $126 in monthly relief the family could get from the county, which works out to less than $100 a month per child per month in today’s money.

“I feel great sympathy for this stranded woman and her children,” says county Supervisor Roger Jessup. “Nevertheless I have sympathy also for the taxpayers of this county. There is a limit to all good things, but unless Los Angeles County can stop playing Santa Claus to every destitute person who comes here there will be no limit to tax assessments for money to support them.”

But not so fast. First, Jessie Brink says she never got that much in relief, the most being $240. It wasn’t all the time, either, just once in a while. Those 12 children? Two of them were married and one died years ago. And she wasn’t going until she got some expense money from the county as promised—$200.

“I don’t know where we’ll go. Under a tree somewhere, I guess,” Brink says. “I can’t stay here (in the apartment of her daughter Vivian Cornellson at Basilone Homes veterans housing project in the San Fernando Valley) any longer.

“I don’t want any part of California—not after the way we’ve been treated.” All those clothes the family received were for winter—it is the middle of July, after all—and none of the shoes fit, she says.

The county raised the ante—promising to pay them $50 when they reached Phoenix, another $50 in El Paso, $50 in Abilene, Texas, and a final $50 when they got to Bartlesville, Okla. But Brink wants a 1947 license plate for the car (the 1946 plate pledged by the county won’t get them through Texas). And money to ship her furniture, $7 to redeem a radio she pawned, haircuts for the children and new clothes.

Somehow everything was settled and the Brinks headed back for Oklahoma, only to run out of money in Oklahoma City. It turned out their ranch no longer belonged to them, the Salvation Army says, inquiring if Los Angeles County would like the Brinks back.

By September, the Brinks were in Tyler, Texas, having accumulated a grandchild along the way. Officials there remember the Brinks all too well and say they paid them to leave once before—apparently for California.

In June 1948, the Brinks were back in Los Angeles after stops in Springfield, Colo., and Salt Lake City, with 10 children and $3.50. James and their oldest son Buddy, 18, left in the old family sedan for Sacramento, saying: “All we went is a place to live, a place where we can raise our family without being hounded to death. And all I want is a chance to work and support my family. We don’t want relief and we don’t want charity. And I’m not running out of my family.”

Apparently the Brinks reunited in Sacramento, where they were building a home, and in January 1949 another child was born to Jessie, making it her 15th. Jessie Brink was arrested in 1950 for writing bad checks to a supermarket and found not guilty. She was also arrested for slugging a social worker, but they made up and charges were dropped.

In 1952, they turned up in Los Angles calling themselves “the Browns.” “It’s been awfully rough wherever we’ve gone. Especially on the kids,” Jessie Brinks says. “Everybody would say ‘Oh, you’re the Brinks.’ And they’d look at us that way—well I can’t explain it.”

The soap opera got worse. James had taken off, their son Buddy was AWOL from the Army and their 2-year-old daughter Linda was run over by a truck. And Jessie Brink, age 47, was pregnant with child No. 16, a girl born May 8, 1952, when the family was living at 607 E. 88th St.

In 1958, three of the Brinks’ children, Richard, Billy Owen and Johnny, were charged with robbing a bartender in a Bell Gardens nightclub. Thelma, the second-oldest, was sentenced to jail for forging checks.

Interviewed by The Times Paul Weeks in 1964, the Brinks summed up their chaotic life. While the youngest girl, 12, was still at home, Jessie was unable to remember the ages and locations of her other children.

James Brink said: “I never knew what welfare was until I left Oklahoma.”

Along with at least 32 grandchildren as of 1964, they left a national debate throughout the 1940s and ’50s on the functions of California’s social services and the welfare system.