The Ballad of Homer and the Washboard 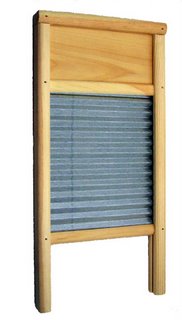 In sentencing ex-con Homer Stone, 45, to a stint of one to ten years in San Quentin, Judge Clement D. Nye didn't praise Stone for pleading guilty and saving the state time and money, no. Rather, he rode the man who admits he beat his mother with a washboard after she accused him of being drunk.

"She called me a bad name, your honor," whined Homer. "I don't think she called you nearly enough," said the Judge. "If I had been there I'm sure I would have called you exactly what she did." Whereupon, one assumes, Homer would have beat Judge Nye with a washboard, so it's just as well he wasn't. The Stone home: 339 W. 46th Street.

Woman Shot
in Mortuary
A pistol shot echoed through Forest Lawn Mortuary at noon yesterday. Attendants rushed into the restroom and found a woman lying critically wounded. She was shot through the head.

Beside her were a .32-caliber automatic, the keys to her car and an unsigned note to the mortuary. It read:

“Please notify my husband. Please give me a private funeral, Christian Science. Omit flowers. As reasonably priced as possible. Please have me cremated, placed in a niche as near my mother as can be.”

The woman was identified as Mrs. Frances Clark Palmer, 44, of 77 W. Harriet St., Altadena. She was taken to Physicians and Surgeons Hospital, Glendale, where she died a few hours later.

Nothing further was written about this unfortunate woman, who killed herself the day before Thanksgiving. There wasn’t even an obituary notice that might have included the names of her husband and possibly her children—if she had any. Who was her mother? We simply don’t know, except that her maiden name was Cameron. Public records show that she had just turned 44 (DOB Nov. 8, 1903) was born in Massachusetts and had Social Security No. 552-10-8600, issued in California. There’s no apparent record of any siblings in the state death records. Her mother might have been Harriet Clark (maiden name Cameron) who died Dec. 30, 1945, in Los Angeles at the age of 76. It's also interesting to note the use of a narrative approach rather than a "five-w" lede.

Bonus factoid: The Thanksgiving edition of The Times is 50 pages with a supplement for Bullock’s. There must have been some very happy ad salespeople at The Times. (All those pipe-smoking dads in pajamas look like a Bob Dobbs convention).

Quote of the day: “When I saw the place, it looked like a cyclone struck it.”
Howard R. Taylor, salesman who let his relatives use his ranch home near San Diego. When he asked for the property back, they moved 10 miles away—and took the house with them.