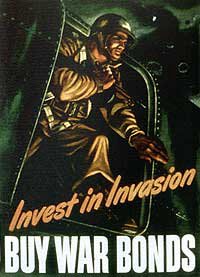 Two years ago, someone snuck into waitress Gertrude Dye's home at 2208 1/2 Marathon Street and stole $2000 in War Bonds and Postal Savings notes out of a dresser drawer. She was able to replace the postal notes, but the War Bonds were a loss.

Until today, when she heard from an LAPD officer conveying a message from his counterparts in Bakersfield, where a gas station attendant had found the missing bonds under the floor mats of a used car he was servicing. The only problem: the bonds are made out to Gertrude and her former husband James. We hope they can split their windfall amicably.
Posted by Kim at 9:28 PM

1. In the top of a double-boiler, combine 1 egg yolk, 1 tablespoon powdered sugar and ¼ cup triple-strength M.J.B. coffee. Half-strength or triple-strength, the mellow goodness of those top-of-the-crop coffees makes M.J.B. double-delicious. Then…
2. Place over boiling water and whip with wire whisk until thick and light. Sniff that fragrant M.J.B. aroma while you’re whisking—it’s a hint of the extra flavor M.J.B.’s “individual roast” coaxes from each coffee bean. Finally….
3. Add mixture to 1 scant cup of hot milk, blend well. Serve at once—and hop in bed to dream of M.J.B. for breakfast. For even with sleepy eyes half-shut in the morning—you can’t make a bad cup of M.J.B.

I have to admit, I don’t understand how this could possibly work or what it might taste like. Egg yolk, sugar, milk and a quarter-cup of coffee grounds. Maybe somebody will try it and let me know. Otherwise it’s going in “Frightening Food of the ’40s.” (And gee, didn’t they leave out the salt?)

Quote of the day: “Los Angeles will have a population of 6 million by 1960. A rail rapid transit system must be constructed, with short subways under the central business district.”
Neil Petree, president of Barker Bros., on solving the city’s traffic problems.