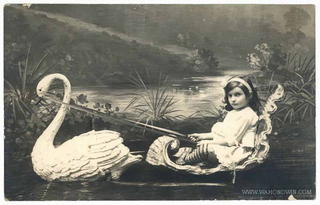 Swans mate for life, and no amount of publicity-seeking, Trans-American hanky panky can change that simple and profound truism.

You’ll perhaps remember the events of April 17, when Gus the Swan, resident of The Pond, Forest Lawn Memorial Park, and recently left bereft by the death of his beloved Elvira, was flown (via American, actually) to Egypt, Mass. to select a new bride from among the purebred flock at Charles P. Chase’s swan ranch. The droopy bird, nicknamed Gloomy Gus for the obvious suffering in his gait, was put into a cage with four lady swans, a quadrifoil reminder that Elvira was no more. Perhaps to put an end to the obscene display, after six days he made a selection. Henrietta was her name, and the two titular lovebirds flew, or rather were flown, back to the boneyard to honeymoon.

Despite news stories trumpeting (sorry) Gus’ new joy, inside it seems he still grieved. Early this morning his body was found deep among the reeds of his pond. Henrietta is inconsolable. And the men whose business it is to bury the dead in a timely and moderately tasteful fashion seem a tad unsure of what to do next. Hold private rites, and then bury Gus next to Elvira, they reckon.

The Times perhaps cynically suggests that they may not remember where they laid the lady.
Posted by Kim at 8:52 PM

The son of slaves and a World War I veteran, Brown was a frequent visitor to Los Angeles gathering support for various issues, such as the anti-lynching law. He urged blacks to increase productivity rather than protests during the Korean War, but also called on President Eisenhower to appoint a black Cabinet member.

Brown visited Los Angeles in 1950 to gather signatures on petitions seeking to prevent the execution of Army Lt. Leon A. Gilbert of the 24th Infantry Regiment. Gilbert, a 10-year veteran who had been an officer for four years, was court-martialed and sentenced to death for refusing to lead his black troops on what he considered a suicide mission. Brown said he hoped to gather 50,000 signatures on petitions urging President Truman to spare Gilbert’s life.

Truman commuted Gilbert’s sentence to 20 years at hard labor on Nov. 27, 1950. He was apparently released after five years and the Army reinvestigated the incident in 1996.