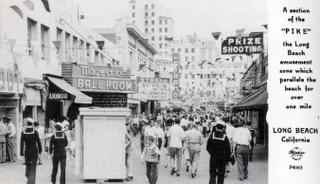 With his divorce papers burning a hole in his pocket, and his heart, 30-year-old James Parker of 2246 Clifford Street stopped today at Marie Baines’ shooting gallery at 315 W. Pike Street and laid down a 5-spot. He picked up the .22 automatic pistol that was chained to the counter and fired at four targets. The fifth bullet found a home in Parker’s right temple. He died at Seaside Hospital at 6:15pm.

When police examined the court papers found on the body, they discovered Parker’s penciled notes denying each of his wife’s allegations. He was next due in court at 9:30am Friday.

Married veterans attending the Los Angeles campus of the University of California have discovered that the dollar—unlike some bank checks—doesn’t stretch like rubber.

So they’ve dipped deeply into their wartime service pay and terminal leave savings, borrowed and in practically every instance taken jobs to eke out their Federal subsidy.

Yesterday, The Times visited “Gayleyville,” largest veterans housing project on the huge Westwood campus, to learn firsthand of their problems.

Immediately apparent—to even the most casual interviewer—were Gayleyville’s magnificent courage, humor and resourcefulness two years after VJ-Day. The veterans, staunchly backed by their wives, are determined to get an education. Not even a diet of spaghetti and beans will stop them.

But cold statistics don’t tell the warm, human story that is Gayleyville.

Buzz is an Air Forces veteran, back in school after a three-year Army hitch. He and Anne, with 10-month-old Judith, live in a tiny Gayleyville unit at 618 Gayley Ave., for which they page $33 ($312.32) a month. (Gayleyville itself was shipped down from Henry Kaiser’s dismantled shipyard at Portland.)

Married in October, 1945, Buzz and Anne came to the university the following March. They had high hopes and low finances.

It took five months for his G.I. subsidy application to be processed; so until August they survived somehow on the $22 a week Buzz earned sweeping out drugstores, window dressing and even assisting in the Sawtelle neuropsychiatry wards.

All this time they were paying $45 a month installments on the trailer they grimly called home.

Then, in May, a kindly Beverly hills veterinarian lent a helping hand. Literally, they “moved into the doghouse” and the young couple got free lodging alongside the animals in exchange for their part-time services. (Anne wryly recalls once answering the telephone at 2 a.m. hearing a woman say, “Please listen to my dog cough—he has pneumonia.”)

Judith was born last October. The Snoyers had run through $350 borrowed from the university and Buzz was feeling a little groggy from giving blood (at $25 a pint) to add to their tottering finances.

But it means working three hours every afternoon as an accountant’s helper (Buzz aims at accounting himself) taking three hours of summer classes and then working from 4:30 p.m. till 1:30 a.m. at North American Aviation.

Between times he studies—and maintains a brisk B average.

Eventually Gayleyville, of which Buzz is president, will encompass 308 families, he said. Some 252 live in the flimsy wallboard structures now, gratefully, with their own volunteer fire and police departments.

Thus Gayleyville in September will inaugurate its own “medical plan.” Each family chips in $13.50 a semester. Ex-service doctors have agreed to handle the cantonment’s pediatrics, obstetrics and general health problems.

Half of Gayleyville’s families have children; one boasts three youngsters; perhaps 50 families have two. So, with Fraternity Row just a block away, this stalwart little area is affectionately dubbed “Maternity Row.”

Buzz, a realist, said that most of his fellow vets “married on optimism” and came to the university flat broke. They find eating their biggest problem; food for a family of three takes Buzz’s entire $90 subsidy. Anne hasn’t bought any clothes since she got three maternity dresses last year and she sews the baby’s garments by hand.

“But,” said Buzz, “Judy only costs us $5 a week. That’s the cheapest entertainment you can buy!”

A junior, Buzz is looking forward hopefully (but isn’t counting on it) to a boost in the G.I. subsidy next year after its postponement by the recent Congress. He considers himself “lucky”—because his bills will be paid by fall—and then he can stop working at night and get a little sleep.

As The Times reporter left the Snoyer home, a harassed young man popped through the front (and only) door. He carried an infant on his arm. Anne reached for the child. The visitor departed.

“This is my contribution,” the girl said proudly. “I get $30 a month for taking care of this baby while its mother works.”

Robert eventually founded his own aerospace firm, Consad Corp., but it collapsed after he went to the FBI to report corruption in a Defense contracting case in 1962.

Gayleyville, UCLA's encampment of struggling married students and small children, was torn down in the 1960s.

I had no idea that amusement parks used to feature "shooting ranges" where anyone could just walk in and have access to a gun with live ammo. That blows my mind. I wonder if such places were the location of other tragedies like this one.

The Pike in Long Beach did have a shooting gallery with .22 pistols at the time. After my Grandfather (James Parker) shot himself it was removed and replaced with BB-guns. His wife at the time is my Grandmother. My mother was 5yrs when he took his life. I used to go to the Pike (Queens Park) as a child. I would like to know who posted this and if there is more info on him since I do not know much about him.

Thank you, D Wayne, for sharing your memories. The information in this story comes from the Los Angeles Times, and I regret that we don't know anything beyond what is included in this blog post. It's possible that this incident was also report in the Long Beach papers, which you may be able to find at your local library.

Around 1950-1955, my mother was 1 of those gallery girls i guess they called them. She was in her early 20s then.
If their is anyone out there who knew of or is related to any of the girls who worked the shooting gallerys or remembers a, Patricia aka Patty (Rake). Please comment below... Sincerely seeking